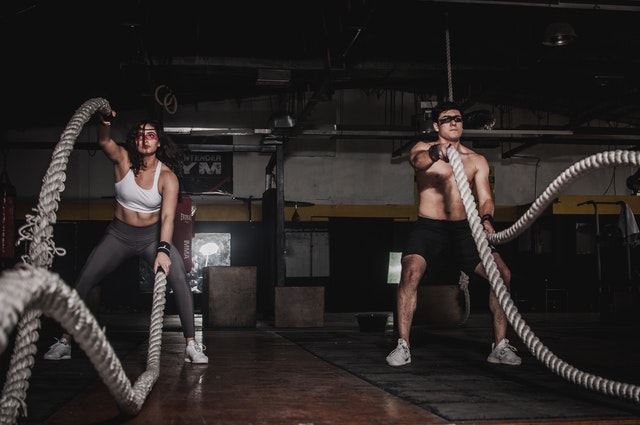 Fighting ropes are also called battle ropes and fighting ropes are mostly used for fitness training, which can enhance the body's strength and adjust the physical state. It was designed by a foreigner named John Brookfield, who developed this system in his backyard around 2006. Since then, this training system has become more and more popular. Studies have shown that 10 minutes of exercise with a rope rope can increase heart rate and energy consumption. After that, the rope has become popular in mainstream gyms.

Because the fighting rope is thick and heavy and has significant resistance, during fitness training, each arm can be exercised independently to overcome the imbalance of strength, and it can also reduce the orthopedic load on the joints.

The rope of the fighting rope is exquisite. If you want to change the training intensity, you can achieve it through the diameter and length of the rope. The fighting rope has two standard diameters of 25 mm and 44 mm, and the three standard lengths are 5 meters, 10 meters and 25 meters.

The basic training methods of fighting rope are waves, punches and pulls. Waves are continuous waves with a fighting rope; slamming is similar to swinging, using a fighting rope to slam the ground and make a "pop" sound; pulling refers to pulling the rope toward you simultaneously or alternately.

In addition, the fighting rope can exercise different muscle groups in the body. For example, moving the rope left and right can exercise the hips and core, thereby improving the stability of the whole body, and moving the rope in a circle will increase the range of movement of the shoulders. If the strength is not enough, you can also add tires to the end of the fighting rope to increase the resistance during traction.

The fighting rope is mainly swaying. The swaying force of the rope is fed back to the body and then the muscles are exercised. Therefore, the following 3 rules should be followed when using the fighting rope to exercise.

Don't just swing the rope up and down, try different movements to exercise different muscles, such as swinging from side to side, you can pay more attention to the hips and core, thereby enhancing the stability of the whole body. Moving the rope in circles can improve the mobility and range of motion of the shoulders, enhance athletic ability, and reduce the risk of injury.

Some will only use the fighting rope as a separate exercise, which is not correct. You must know that the rope of the fighting rope can exercise your body well. For example, you may exercise for 10 minutes at a time or do it alone for 20 minutes. Such a long-term exercise can make the muscles tense, but with other exercises, you can concentrate and help the body flush out lactic acid.

Moving away from the fixed point will reduce the intensity of exercise, while moving closer to the fixed point will increase the intensity of exercise. Adjusting the slack of the fighting rope allows you to increase the challenge when completing each set of actions. For example, during training, alternate between 1 meter near the anchor point and 2 meters away from the anchor point, which will greatly help the training itself.

Want to open a gym? What to buy fitness equipment ?
What gym equipment is best for triceps workout
How much money is needed to opening a gym centre with full machines?
The use of intelligent spinning bikes in the gym
Georgian Customers Opens A Gym With BFT Fitness Equipment
How to Start Your Fitness Studio / Fitness Center / Gym Business
Tips for you start to exercise
What is Hammer Strength Exercise Machine & Hammer Strength Plate-Loaded Equip
Which part of the body is best for the rowing machine?
best gym equipment company from china